The causes of stress are many–from the big, lifetime occurrences like loosing a loved one or loosing your job, to the small, daily stressors like getting a parking ticket and talking with your child’s teacher about her latest grades. Sometimes the causes are physical–an illness or injury, and other times they are mental–a fight or a difficult deadline.

In everyone’s life, we have stress. Understanding the what causes stress can help us to better manage our stress, to anticipate what we need to do to cope, and make arrangements to reduce the stressors as much as possible.

Demographic Groups that are Prone to Extra Stress

Traits and Attitudes that Increase Stress

Spiritual stress may be the most amorphous of the stressors. We hardly recognize an existential crisis in our busy everyday lives, and yet often at the root of stress, we have lost our connection with the Divine. We yearn for meaning, security, a sense of place. When we are in touch with the Divine, often very stressful situations pass easily. A death becomes a tender farewell. A financial crisis becomes a chance to reprioritize. A lost job becomes an opportunity to do something more fulfilling.

Our lives have stress. The lists above demonstrate that the people who don’t have a stressor in their live are a smaller group than the people who do. So while the causes of stress are important to understand, what is more important is that we learn tocope with the stress that inevitably comes our way.

When asthma and stress come together, they can compound the symptoms of both. Fortunately, there are some natural ways to relieve both and get you breathing again.

Asthma symptoms include wheezing, coughing, and shortness of breath. During an attack, you may feel like you are being suffocated, because the muscles around your bronchial passages tighten, blocking the passage of air. Air moving through these constricted airways produces the wheezing sound so characteristic of asthma.

If you have asthma, you will also experience inflammation of the bronchial tubes; your airways swell, making breathing even more difficult. Your asthma attacks may be triggered by even small amounts dust, pollen, fumes, or animal dander. You will find you are much more sensitive to these environmental factors than people who do not have asthma. Stress induced asthma can also be triggered by an emotional upset.

The Relationship between Asthma and Stress

Western medicine has been puzzled over the mechanisms involved in stress induced asthma.

If you have asthma your body may respond to stress with more activity of the parasympathetic nervous system, than of the sympathetic nerve system. This constricts the airways and can lead to an asthma attack.

The reasons for this are not clear and so treatment in the West has centered on reducing asthma symptoms, rather than treating the underlying causes of the problem.

Alternative healing systems, such as Traditional Chinese Medicine approach asthma and stress with a holistic focus instead of a symptom-based approach.

According to traditional Chinese Medicine, the three pathogenic factors of Wind, Cold or Heat are responsible for causing the muscle spasms which tighten the bronchial passages during an asthma attack. These factors are forms of energy. Wind causes imbalance in the bronchi and together with Cold or Heat causes the tightening of the breathing passages.

If you are having an asthma attack, you are in an acute Excess condition. During an attack, the aim of traditional Chinese medicine is to stop the Excess Wind and thus relief the attack. Once you are over the attack, you are considered to be in a Deficient condition.

In a Deficient condition, your body will produce Defensive Chi in the kidneys and your lungs will spread it throughout your body. Defensive Chi is energy produced by the body to ward off disease. The concept is similar to the Western concept of the immune system. Weak lungs or kidneys can cause a lack of Defensive Chi.

Acupuncture for Asthma and Stress

Chinese medicine recognizes that emotional turmoil and stress play a role in asthma.

Points for “calming the spirit” are used during acupuncture treatment for asthma. Acupuncture stimulates your body’s natural neuro-regulation of the bronchial airways. Acupuncture treatment to strengthen the kidneys and build up Defensive Chi has been shown to increase red blood cell count and produce other beneficial measurable changes in body chemistry

Some people have found asthma relief with an alternative treatment developed in Russia. The Buteyko Breathing Method operates on the theory that people with asthma hyperventilate and this greatly contributes to their breathing problems

If you have asthma you unconsciously develop the pattern of rapid, shallow breathing known as hyperventilation. If you suffer from stress-induced asthma this can be a critical factor, since stress itself frequently causes hyperventilation. During hyperventilation your body is not receiving enough oxygen, but this is not the only problem.

Hyperventilation also deprives the body of carbon dioxide; while you probably think of carbon dioxide as simply a waste product of the breathing process, this gas is important in regulating your body’s use of oxygen. Without sufficient carbon dioxide in the blood, your body does not receive the chemical signals it needs to utilize oxygen effectively.

The aim of the Buteyko Breathing Method is to retrain asthma patients to breathe slowly and allow the body’s natural breathing regulation to ease their disease.

Asthma and Stress can become a vicious cycle. You are stressed by other factors and now the additional stress of asthma is added to the mix. Your fear of having an asthma attack may actually lead to a stress induced attack. Don’t despair. Explore your options. An alternative treatment may be your ticket to better breathing.

When your acne flares from stress, use acne alternative treatments instead of harsh chemicals. You can improve your skin without adding toxins to your system. 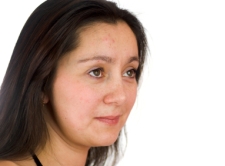 When you are under stress, your body’s chemical balance is disrupted.  Among many imbalances, your body increases inflammation (an overactive immune response). Toxins of all kinds create the same response and so adding toxins to an already overloaded immune system just makes your body’s health worse.

Acne is caused when the follicles, or pores, of the skin get blocked and the sebum, or oil, inside the follicle is blocked from draining.  Once this happens, bacteria begin to grow in the blocked follicle.  This blockage can remain un-inflammatory (a whitehead or blackhead) or it can become inflammatory acne (papule or pustule).  In either case, the acne is the result of the follicle being blocked from properly draining the sebum.

There are several factors which some believe contribute to acne.  Poor diet may exacerbate it, as can stress.

All of these essential oils can help acne problems, but they can also be drying.  If you notice that your skin is getting too dry, just combine them 50-50 with and organic vegetable oil. When you apply the oils, rub them in very gently; do not irritate the skin.  And for maximum effectiveness, alternate your oils every day.

The other way to use essential oils in your acne alternative treatment is to use oils which help balance your hormones.  Essential oils have homeostatic intelligence–they work to balance natural functions.  This means that the same oil may stimulate in one circumstance and calm in another.  Using oils which have hormone regulating effects will support your body finding its normal hormonal balance.

To use the oils, rub a few drops on the soles of the feet or crown of the head 1-3 time/day.

When stress increases your acne, alternative treatments are the best way to clear your skin and support your overall health at the same time.